CVE-2019-8761 is an interesting macOS bug I found that lets attackers execute HTML within a TXT file, leak files, and do all sorts of other funky things when a TXT file is opened.

This research originated when I realized the default text reader on OSX, TextEdit is used to open files with TXT extension by default. On the interface of TextEdit, it looked like you can do basic customization to your text (you can turn text bold, italic, change color etc...), so I was wondering how a TXT file was storing and parsing this information. It seems it uses RTF format instead of TXT if we add customizations to the text.

A TXT file is a very interesting attack vector in my opinion, because of its innocent nature that carries nothing but text. however, we have previously seen memory corruption bugs leading to RCE by Tavis Ormandy in Microsoft Notepad. TXT files are also assumed by anti-virus software, firewalls, and even Mac's own Gatekeeper as safe downloads that can't possibly be malicious.

After some quick back and forth testing between files, I quickly realized that TextEdit can be tricked into thinking the file opened is an RTF-HTML file even when the file extension is TXT. The ability to inject HTML into a TXT file obviously opened lots of potential attack vectors.

If a .TXT file started with the following bytes:

It seems TextEdit for some reason thought it should parse the HTML even while the file format was TXT. So we can inject a bunch of limited HTML into a text file, now what?

One of the first bugs I discovered using this showed me that Gatekeeper doesn’t quarantine TXT files even if they were downloaded from a suspicious website. For example, I found a TXT file force-downloaded from Tor browser, when opened can bypass Gatekeeper and leak the real IP address of the victim without any warning. This wasn’t very straightforward though.

I first tried to see how much of the HTML is parsed and interpreted by TextEdit. It seems there was very limited parsing and many of the interesting HTML attributes were not available. I then went ahead and got the awesome Cure53's project HTTPLeaks, which is a wonderful file to discover if an HTML/CSS attribute leaks data to a third party.

I replaced all the URLs in the HTTPLeaks attributes with a server I control and saved it as TXT to see if the TXT file made a request to my server. It didn't.  After some fuzzing, I found two interesting CSS and HTML attributes that got some sort of weird response from local files.

while fuzzing different schemes, I found out the CSS property

was allowed to load local CSS files. However, the only scheme that worked was file:/// and not even http/s://. While this means we can't make external requests, it also means we can hit or open other files that are stored locally on the device. This creates a very obvious DOS vulnerability that acts like a blind SSRF by writing a recursive file inclusion or, reading files with infinite data streams like /dev/urandom, /dev/zero. a 2kb text file can crash your mac. COOL, but completely useless.

When the victim  opens a .TXT file with the following contents

This is what they see: 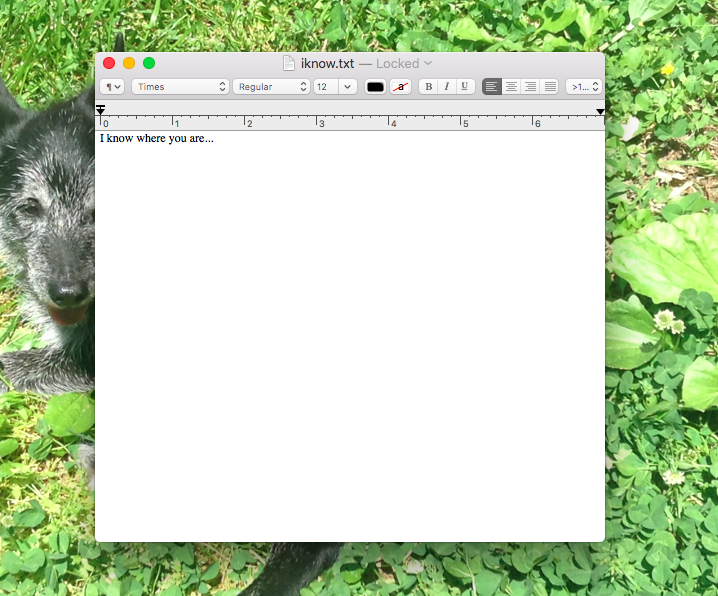 But on the attacker side we get a hit: 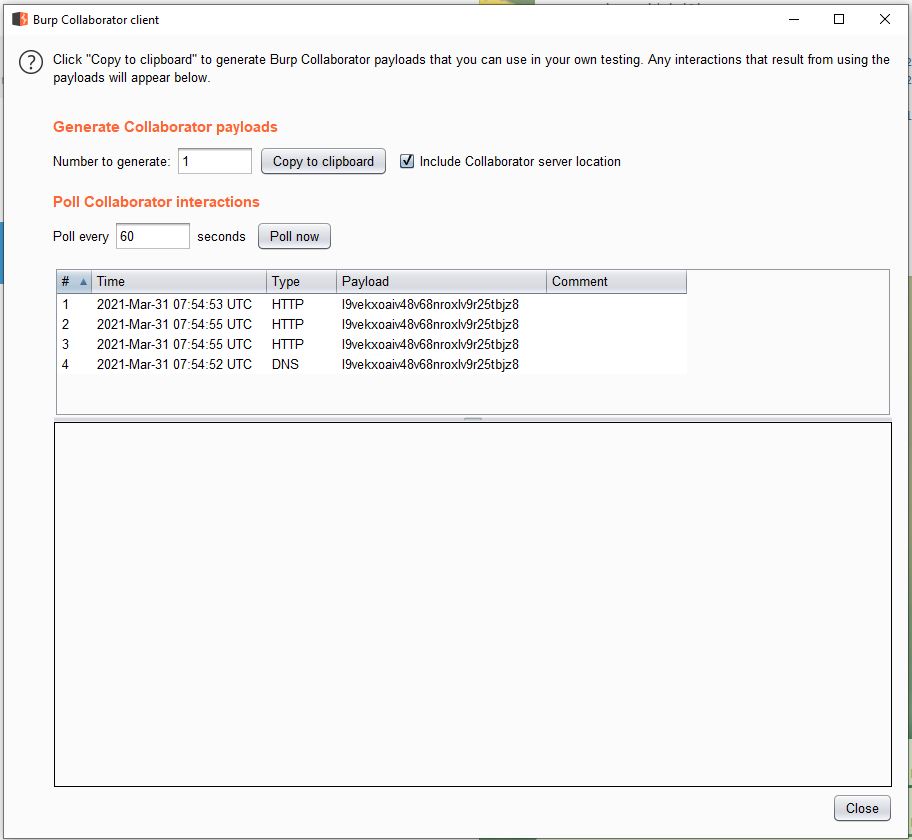 So I will know when you opened the TXT file I sent you. Not only that, but apparently AutoMount uses the kernel to make TCP connections so even if you were using a proxy, it was leaking your real IP address. I found another browser trick that lets force-downloaded TXT files to be opened without user interaction or warning (since Gatekeeper doesn't exist for TXT) leaking IP straight out of Tor browser.

Leaking IP Addresses and knowing when your TXT file is open is cool n all, but what else can we do? It seems a lot worse!

It turns out an attacker can embed local files using the <iframedoc src="file:///etc/passwd"> and look at their contents within the TXT file. 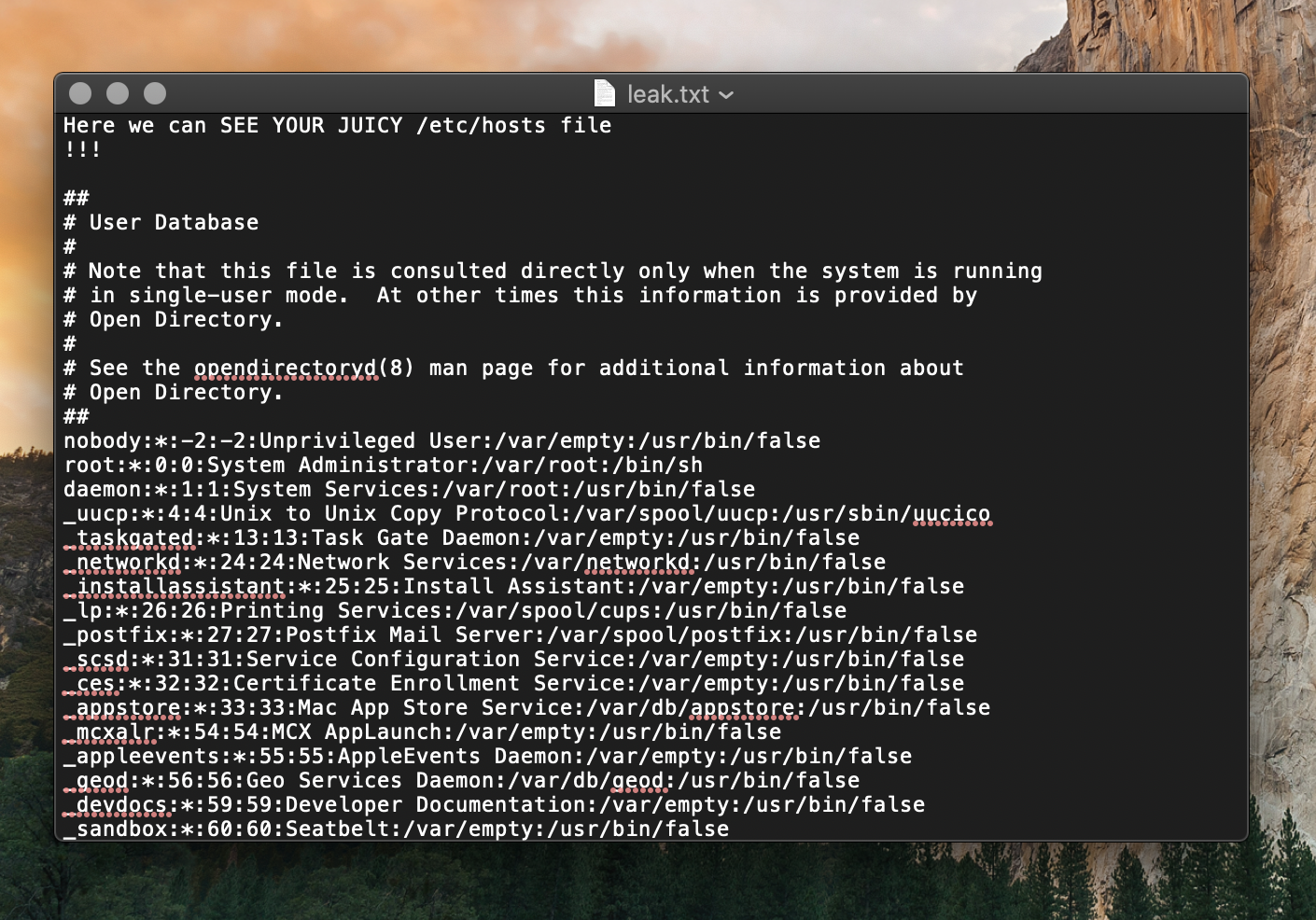 I will not leave a PoC for this chapter but I promise you, it will not be that difficult to figure out after reading the above two parts. While we can embed/open local files, we still can't execute javascript so it might seem like there is no way to send them out at first glance. But this is where dangling markup comes in.

Dangling Markup attacks are nice browser tricks that serve as scriptless attacks to leak data when dynamic scripting is disabled. For example, they can often be used to steal anti-CSRF tokens in cases where CSP stops javascript execution.

By combining the <style> CSS attribute with the <iframedoc> attribute, an attacker can first include an unclosed style tag,  embed the contents of the file they want to steal and then leak the content as dangling parameters to their evil site as soon as the file is open.

Thank you for reading :)